Through a new content series called RIP ‘N’ RUN, Amy Rose shares her story of how she surrounds herself in nature to nurture her mental health — with words and images that describe her 72 hour nano trips through some of our country’s most beautiful landscapes and national parks. It’s a story of observing the power we have within ourselves to get better.

The static has risen up inside of me again. It’s so loud I feel like I can’t hear. Sometimes I fear it’s going to strangle me. Static is what I call my anxiety and depression. It’s the static that I run from in the trees, on the trails, and next to the waterfalls. I learned to run almost four years ago. It came as a challenge from a dear friend while I was experiencing an especially bad bout of depression, which left me thinking of an untimely demise for myself. It’s a place I’ve visited before. The static is loud again. How will I turn it down this time? 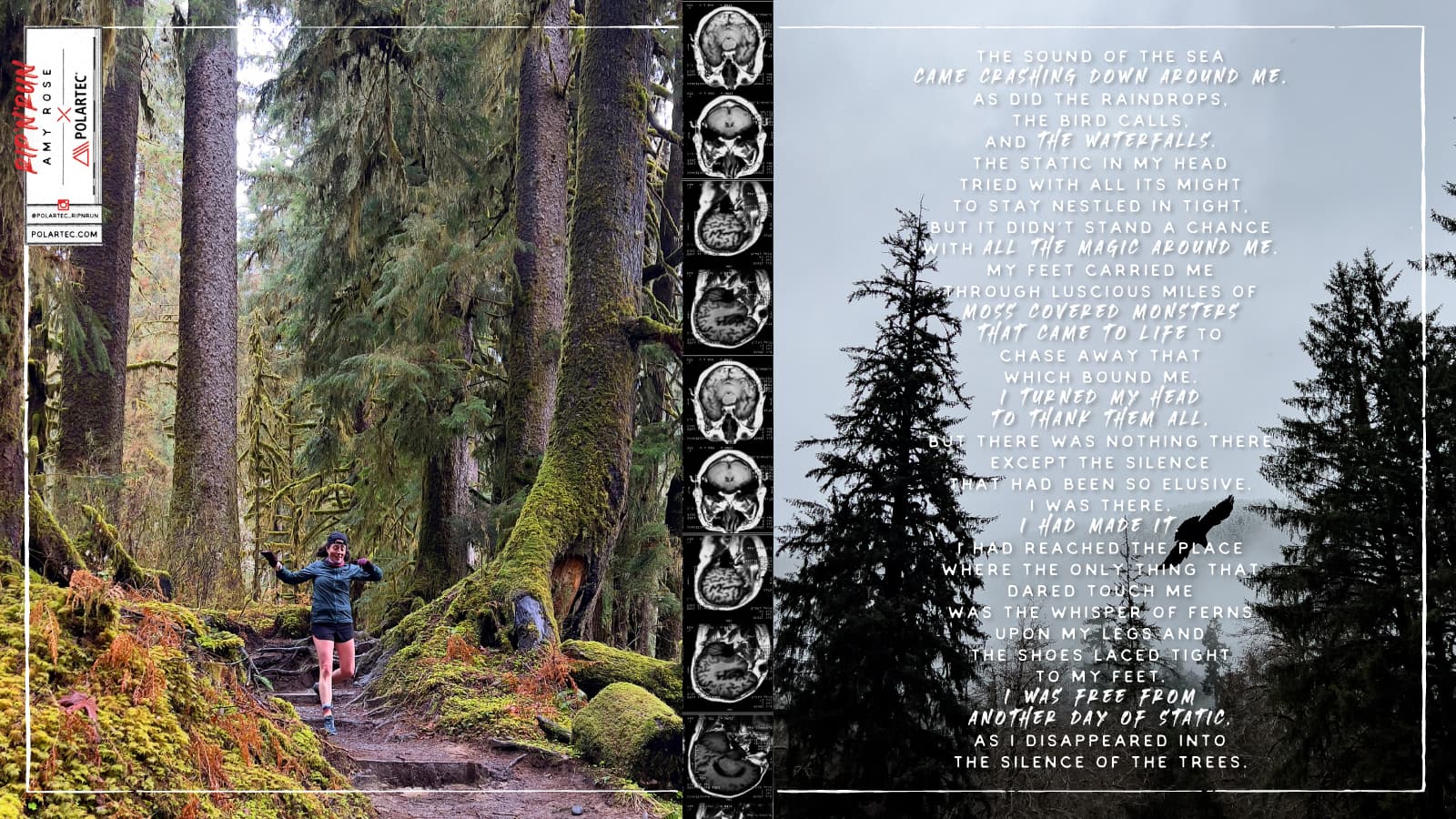 I had learned about One Square Inch of Silence several years ago. It was designated as such on Earth Day 2005 to protect an area of the Hoh Rainforest, located deep within the Olympic National Park, from commercial noise pollution. Maybe it would bring me the silence I needed to calm my troubled mind. I grabbed my favorite running kit, every piece of raingear I owned, and packed up the car for a five hour drive north to quell the static inside of me.

The drive was a battle of thought, rumination and judgment. How do I survive in such trying times? How can I persevere when it feels like I’m just out here caught in the wind flying around untethered without enough sustenance to sustain myself?

As I worked my way along the smaller highways, twisting and turning through unfamiliar towns that dotted the landscape I remembered hearing about a tree perched precariously along the Washington coast that defies the odds pitted against it, the Tree of Life, a magical sitka spruce suspended in air. A small, but constant stream washes away the earth below it, yet it lives and grows in seeming defiance to the erosion undermining its safety and security. It all seems so relatable, and so beautiful. A myth come to life before my very eyes!

As I stood there with the setting sun behind me I marveled at the weight of the tree’s trunk bent in an effort to stay grounded in the earth once firm under its warped frame, its branches hung low in a humbled attempt to balance above the constant erosion beneath it. Its roots outstretched in an unbelievable effort to cling to the place it has called home for an undetermined number of years. I was in awe. It held on as if its life depended on it, in fact it did. Why, against so much strain, did it think life was so important, so worth holding on to? Perhaps it’s holding on to show the world we too can hold on, even when it seems life is conspiring against us. Perhaps it held on to watch another sunset. No matter what the reason, it gave me pause and afforded me the opportunity to abandon the rumination inside my head for at least a few minutes.

The rain was falling heavily the next day, summoning me deep into the rainforest with the most noble effort it could muster, and the promise of silence. As I followed the gray clay trails through magical moss covered giants I stepped carefully, as the roots took no issue with exposing themselves and the quicksand-like puddles threatened to leave me without shoes as the mud pulled at them with great intent, forcing me to pay close attention to where I landed. One misstep and I imagined I’d be swallowed up by the ferns and tangled green masses around me in my search for silence.

The green moss monsters rose up from the earth bathed in a constant mist of drizzle were unlike anything I’ve ever seen. The rich greens, yellows and browns extended as far as the eye could see. Water droplets hung steadfast to every surface they could find.

I searched in vain for the little red cube I had seen on the PBS episode about Gordon Hempton’s findings years ago, marking the location he deemed one of the few remaining silent natural areas in Washington state. There was no silence. The birds’ cries, the rustle of leaves caused by unseen inhabitants, the rush of the Hoh River at my side, the rain tap dancing upon the leaves, trunks, ground, and even my head. I think if I listened closely enough I could even hear the ferns growing! It was so loud it forced every thought I had out of my head, every variation of rumination, every fear, and every bit of sorrow. With every raindrop a tear I had stored up that was pooling close to the surface found an easy escape until a great sense of relief passed over me. I felt free again. It's a freedom only nature brings to me.

The sounds around me were almost deafening. I picked up my pace, leaping over puddles and dancing across a labyrinth of roots. Beyond the quest for One Square Inch of Silence there were waterfalls to find. The negative ions from the airborne droplets from them are believed to produce biochemical reactions that increase serotonin, relieve depression and stress, leaving an energized buzzing sensation in your head, and my feet couldn't carry me fast enough to nature’s relief! 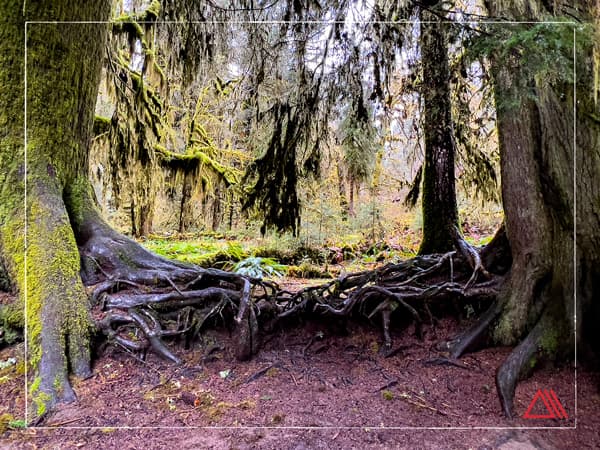 The static had lessened. It wasn’t due to silence, it was due to the exact opposite. I was humbled by the power, resilience and wonder of it all. As I ran through this magical place my mental pain and anguish left me for long enough to remember and feel joy. To realize what I was rolling over and over in my head wasn’t real or worth my energy. My energy was needed to take me places beyond my dreams, to share smiles with people I passed looking to do the same, to share with the trees that gave me so much without asking anything in return. Running in such a sacred place reminded me that I too am sacred. That I too deserve my own wonder, adoration and respect. When I remember I am worthy of my own kindness I can separate the static, take deeper breaths, release that which binds me, and find a place of calm and gratitude.

I’m not saying nature is a cure all, but what it does for me and so many others is give us the strength, resilience and calm to face the static when it comes back, because I know it will. It’s something I’ve been living with since I was 12.

The forest and trails are a community unto themselves. They all rely on one another to make it through another day. The trees lean on one another, grow from inside the trees that have fallen, mushrooms blossom from their trunks, they all work together. When I feel all alone I must remember that I have the trees, the birds, the trails, and my feet to make it through another day as well, silence or not.

As for the One Square Inch of Silence, I couldn’t find it. I stopped at the visitor center to inquire about it before I started the trip back down the coast. It turns out the little red cube had been removed some years ago because it was disrupting the delicate balance of the ecosystem and drawing more attention than the rainforest itself. I wasn’t too disappointed about its disappearance, because in the end I found what I was looking for. 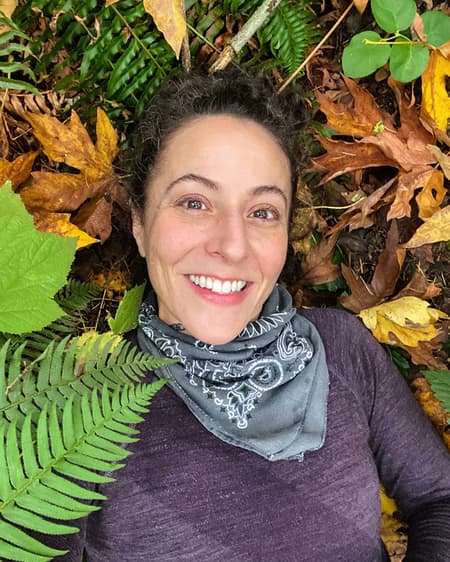 Amy Rose is a hair stylist, trail runner, photographer, writer and mental health advocate. She has been using trail running and hiking as a tool to help battle depression and anxiety for over 5 years. Amy credits running and her discovery of nature as a muse as critical to assisting in her recovery and transformation. Her unique perspective is apparent in her writing and photography and shines a light on the pursuit of seeking alternative mental health and lifestyle choices. This year Amy’s run goal is to surpass the 1,075 miles she ran last year. Let’s see if she can do it!