James Russo is all about the hustle. Because that’s what you do when you’re from Brooklyn. By day, James is a family man working as an audio-video engineer. By night, it’s all side gig. Whether that’s producing hip-hop music (his first love) or managing his catering business, James is always looking for the next to stoke his passion. But his most recent project has taken him to fresh new territory. James is making a name for himself as an upcycling fashion designer inspired by streetwear and hip-hop culture with his new brand Flavorseal.

It Was All A Dream 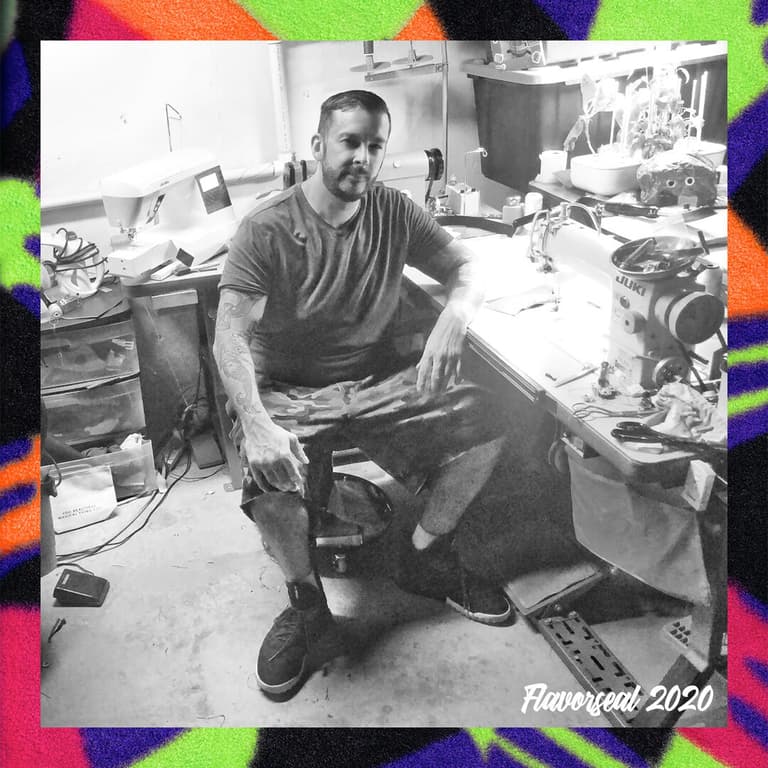 James always had a taste for style. Growing up in Brooklyn in the ‘90s, he was surrounded by big bold patterns, unique prints, and premium name brands with logos visible at all angles. It’s the city that inspired modern streetwear today. It also inspired him to dream up a product of his own - a handmade hat with a touch of Brooklyn. The only problem, James had never seen a sewing machine in his life. But if he wanted this dream to come true, he had to learn.

“It was so much harder than it seemed at first,” James said. “I failed and failed, and actually gave up a few times. But I said to myself, ‘If I can use a drill press to make an audio-video device, I can learn to sew.’”

After hours of tutorials, joining forums, and breaking needles, James had finally sewn his first hat. Overcoming that challenge was a significant first step in his journey. Today, James owns seven different sewing machines in his mini-factory, or as his wife likes to call it, the basement.

“For me, it was about showing my kids that when you have an idea, you don’t give up on it so easily.” Sewing his first piece is when it clicked for James, that he could turn this into something bigger than he originally thought.

Can I Kick It?

James launched Flavorseal in early 2020, a streetwear brand and personal project that sells hats, hoodies, and other accessories through his website, Depop, and Instagram. His designs are like nothing you’ve ever seen before, made from classic pieces you have seen before. In other words, he completely upcycles old material.

Upcycling is a major part of Flavorseal’s identity. James shops at thrift stores and flea markets to search for vintage pieces from premium brands, brands that he himself couldn’t afford back in the day but wanted so badly, and turns them into fresh handmade hats. He preserves the integrity of the old jacket by keeping certain elements like the tags, zippers, loops, and logos - don’t forget the logos. He breathes new life into vintage pieces to make something unique and artistic.

“Flavorseal is about true creative expression,” James said. “It’s about giving that kick of flavor to something that’s gone a little stale.” Like taking an old song and making a fresh beat. To James, Flavorseal coincides completely with hip-hop culture. The glow in the dark accents, reflective hi-viz stripes, name-brand mentions — it all stands out from the rest. “That’s what hip-hop is all about.”

When Polartec found his work, we challenged James to find ten OG Polartec jackets by partners who have been making with Polartec fleece since day one. James found vintage pieces from FILA, The North Face, Patagonia, Marmot, Eddie Bauer, Ralph Lauren, Jack Wolfskin, Eider, Degre 7, and Marker - all brands part of the Polartec legacy.

The Polartec Flavorseal collection reimagines classic pieces in James’ form of hip-hop headwear. These garments all have incredible color and were extremely well constructed, so much that it held up for over a couple of decades and are now transformed into well-made hats. We’re excited to see new life in these old jackets, especially as we celebrate 30 years of Polartec and 40 years of fleece this year. James hadn’t work much with fleece before, but as you now know, he doesn’t shy away from a challenge. “They’re handmade with love.”

The World Is Yours

So what’s next for James and Flavorseal? In the short term, he hopes to continue crafting upcycled hats. He wants to open up more products for his fans to purchase, even something as simple as a shirt with the Flavorseal name on it. But in the big picture, the sky's the limit. He hopes to see the Flavorseal logo on a storefront one day. He wants to run a factory that also serves as his personal recording studio and his dream restaurant in one place. He wants all his dreams to come true, and so far, they’re all on the way.

“I want to inspire people to be more forward-thinking in their lives. To be creative and not be scared to do it. I want to show my kids that they can do anything.”