Not many can say they’ve spent 100 years perfecting their craft, but Millet can. They’ve been mastering the mountain lifestyle for a century now in their home base of Annecy, France. From crafting grocery bags in the French Alps to making rugged backpacks fit for Everest, Millet is one of the true outdoor icons of Europe, earning the trust of adventurers around the world.

Millet grew up alongside the great mountaineers of climbing’s golden age. Legends like Reinhold Messner, Éric Escoffier, and Patrick Edlinger sported Team Millet on expeditions to the tallest peaks in the world. But as adventures got colder and nights got longer, the athletes made it a mission to find the right technical apparel for mountain performance. This is where Millet led the way as one of the first to adopt revolutionary Polarfleece in Europe, finding the next evolution of warmth and comfort on the mountain. 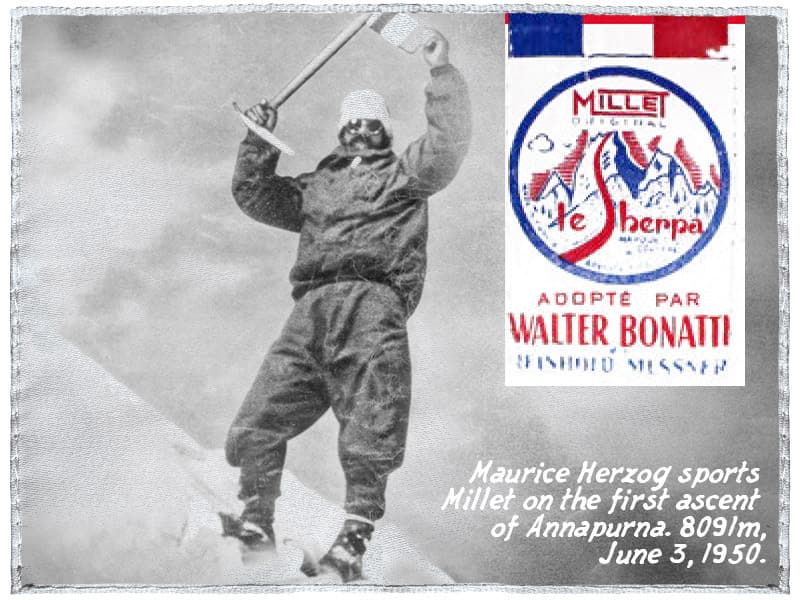 Millet joined the Polarfleece phenomenon of the late ‘80s along with an esteemed group of European outdoor brands. They knew that fleece and its technical benefits would serve best on the mountain, and the experts agreed. But when you live in the French Alps, wearing warm and comfortable fleece is just the lifestyle. On ski trips, on hikes, and even just sitting around the house on a cold night — Fleece is just as natural to the French lifestyle as drinking Bordeaux for breakfast.

But it wasn’t just the function of warm and fast-drying fleece that felt right. The colorful prints and vibrant patterns made their way to Millet’s catalogs, matching the lively energy of the mountaineers who wore them. It was flashy, it was fashionable, and in classic French style, it was fabulous. The colors of Polarfleece defined an era of European outdoor style that’s still immortalized today, and Millet embraced it throughout the ‘90s as the fleece from Malden Mills transformed into the Polartec brand.

Millet and Polartec have shared the same aspirations for three decades now. As Polartec developed new and sustainable technologies, Millet was there to embrace them. As Millet sent athletes on superhuman expeditions around the world (similar to the old Polartec Challenge Grants), Polartec improved the materials to better fit their needs. And as we know, it didn’t stop at the original fleece.

In the ‘90s, Millet was proud to welcome the next evolutions. They adopted weather-resistant Polartec® Windbloc® and contouring Polartec® Power Stretch® for more flexible movements on the mountain. They were proudly part of the softshell revolution and utilized Polartec® Power Shield® for all-weather conditions. And that was just the beginning.

“Polartec has been a privileged partner for many years,” said Nicolas Thomas, apparel designer at Millet. “Polartec has known, through the different projects of our athletes, how to innovate and propose performance fabrics that adapt to the demanding conditions of mountain sports.”

This innovative partnership remains to this day as Millet adopted the more modern Polartec inventions. They served as launch partners for highly breathable Polartec® Power Wool™ and extremely warm Polartec® Power Fill™. And they jumped on the latest in sustainable performance technology once they heard about Polartec® Power Air™, a fabric that reduces microfiber shedding up to 80%. It’s 30+ years of innovation that continues today as Millet celebrates an incredible milestone.

A Century In The Mountains

Polartec is honored to be a part of Millet’s HERITAGE Collection as they look back at 100 years in the mountains. This collection remembers the great mountaineers of the ‘80s who pushed the movement of performance textiles in extreme mountain sports. And there was no better partner for Millet than the makers of original fleece.

“The Thermal Polar Fleece proposed in the HERITAGE collection, is a product with a vintage design,” said Thomas. “It has been inspired by the iconic Millet fleeces revisited with a fabric proposed by Polartec with an old-fashioned touch, yet definitively with a modern style, thanks to its comfortable and thermal technical side.”

The Millet Thermal Polar Fleece JKT is designed with Polartec® Thermal Pro® Shearling fleece made from 100% recycled PET plastic. Designed to preserve warmth in the coldest environments, this special edition jacket includes a Millet 100 Year Patch logo on the shoulder and chest. The HERITAGE Collection is available for Fall/Winter ‘21.

Here’s to another century in the mountains.